The ADAS Effect on Vehicle Diagnostics and Repair in 2023 With nearly all manufacturers’ updates reported, over 90 percent of all vehicles of curb weight 8500 pounds or less produced and sold in the U.S. between September 1, 2021 and August 31, 2022 included automatic emergency braking (AEB) and frontal crash warning (FCW).[1]  This was the sixth progress report from the twenty automakers that originally signed up for the Commitment to Advancing Automatic Emergency Braking, and shows that many automakers have nearly reached the 100 percent goal by the target date of September 1, 2022.

Figure 1 illustrates the gains made by automakers towards the commitment, where the total share with AEB started at just 25 percent for vehicles produced and sold in the U.S. from September 1, 2016 to August 31, 2017 (Figure 1). 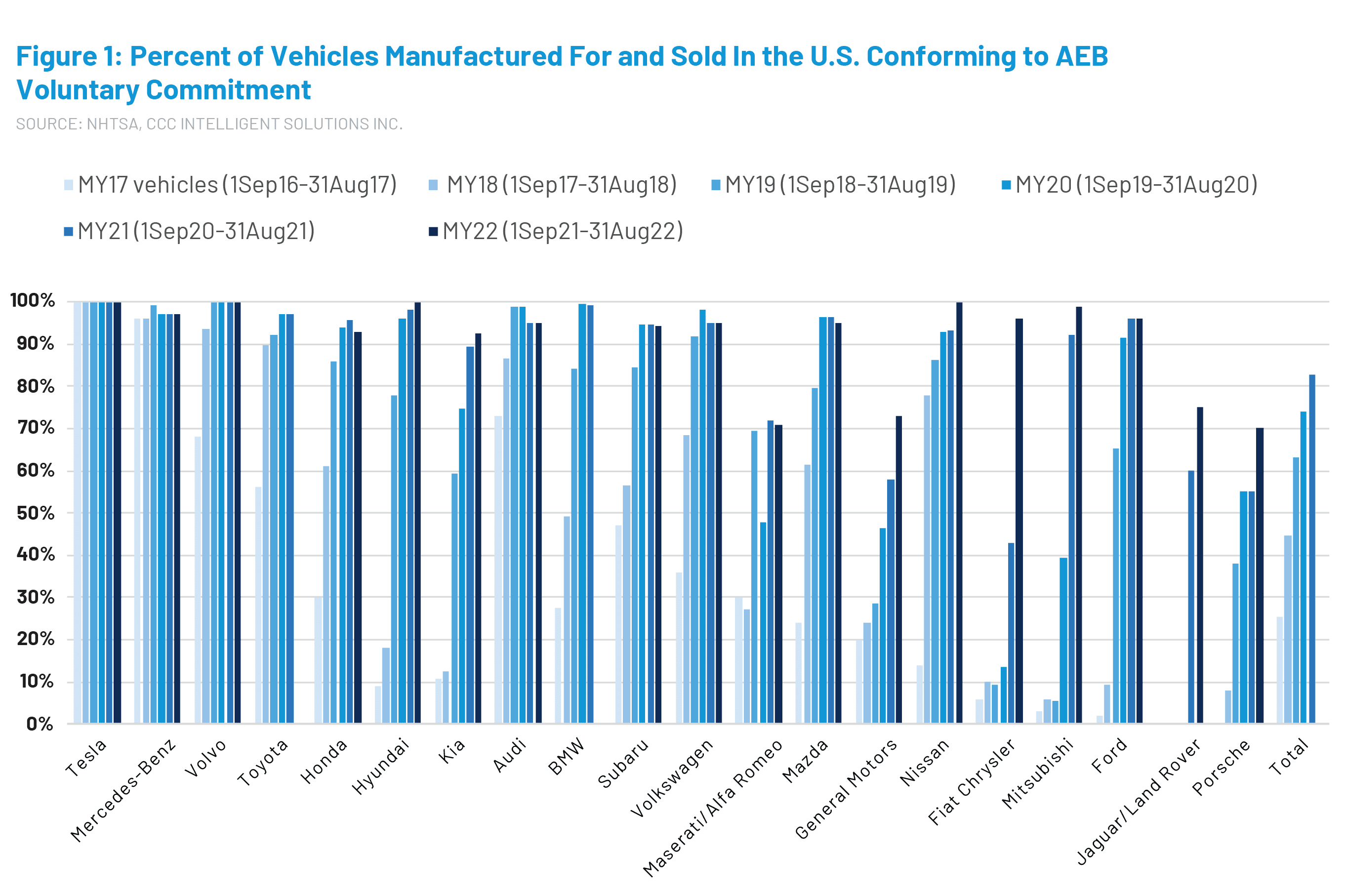 Specifics on the test guidelines or protocols used by the automakers to demonstrate they are meeting the commitment are in the addendum to this article. However, there remains within the tests a fair amount of variability resulting in a range of capability and performance. The work required to repair ADAS-equipped vehicles differs substantially among vehicle manufacturers as well.

Other challenges that impact how ADAS change crash frequency and loss costs are also difficult to project given these factors: 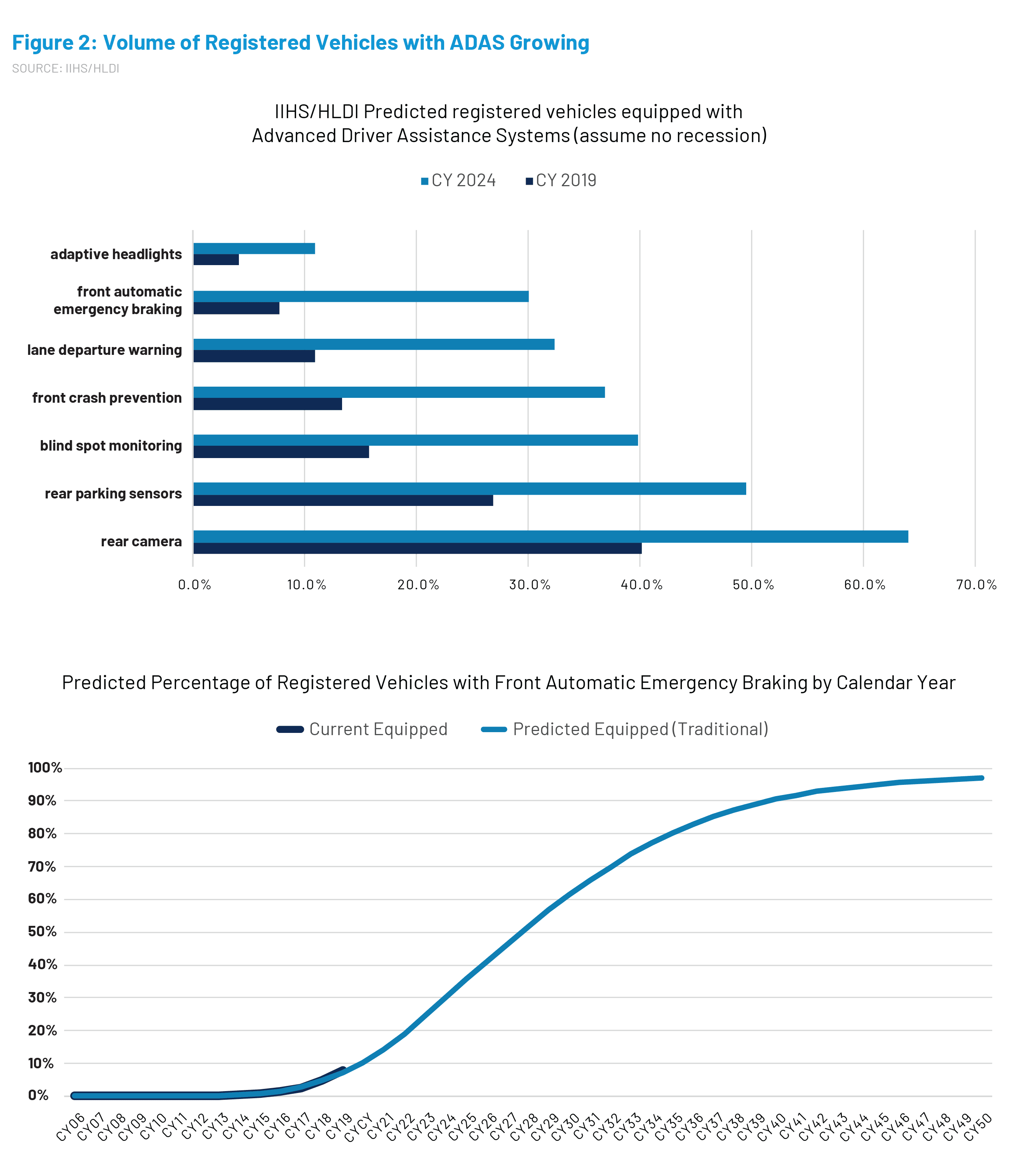 Further complications have arisen as more automakers have introduced Level 2 autonomous features in their mainstream vehicles. When adaptive cruise control and lane-keeping assist capabilities are combined (Level 2 autonomy) they can lessen the effort of driving but are often misperceived or inaccurately advertised as fully autonomous and can reduce situational awareness of the driver, especially if their experience with the technology is limited.[3]

While real-world data shows that certain ADAS features such as front and rear AEB and blind-spot warning do help reduce certain types of accidents, other features such as adaptive cruise control coupled with lane-keeping assist have the reverse effect. Most ADAS technology has also been designed to avoid accidents altogether at lower speeds, but as speeds increase, the systems often can only mitigate speed before impact.  When an accident does occur, greater electronic content and more part components are leading to higher repair costs and complexity for ADAS-equipped vehicles.

With growth in vehicle complexity, it is ever more imperative that technicians have access to information on how to properly repair the vehicle, as well as the equipment, tools and training needed to complete accurate repairs.

Features such as rear backup cameras, blind spot monitoring, automatic emergency braking, forward collision warning, adaptive cruise control, and parking assist require vehicles be equipped with numerous cameras, sensors, radar and lidar that are commonly placed around the perimeter of the vehicle, where likelihood of damage during a collision is high.

Data from vehicle appraisals collected by CCC on behalf of its customers revealed that 15 percent of appraisals in Q3 2022 included an entry in the appraisal for repair, replacement or R&I of a camera, radar, lidar, sensor, etc. that was distinct from entries for scan and calibration.  This percentage has grown steadily, particularly for the newer model year vehicles (Figure 3).  Examples of the combined part and labor costs for commonly replaced components include parking sensors ($138); impact sensors ($94); distance sensors ($586); rear cameras ($50); and blind spot radar ($340).8 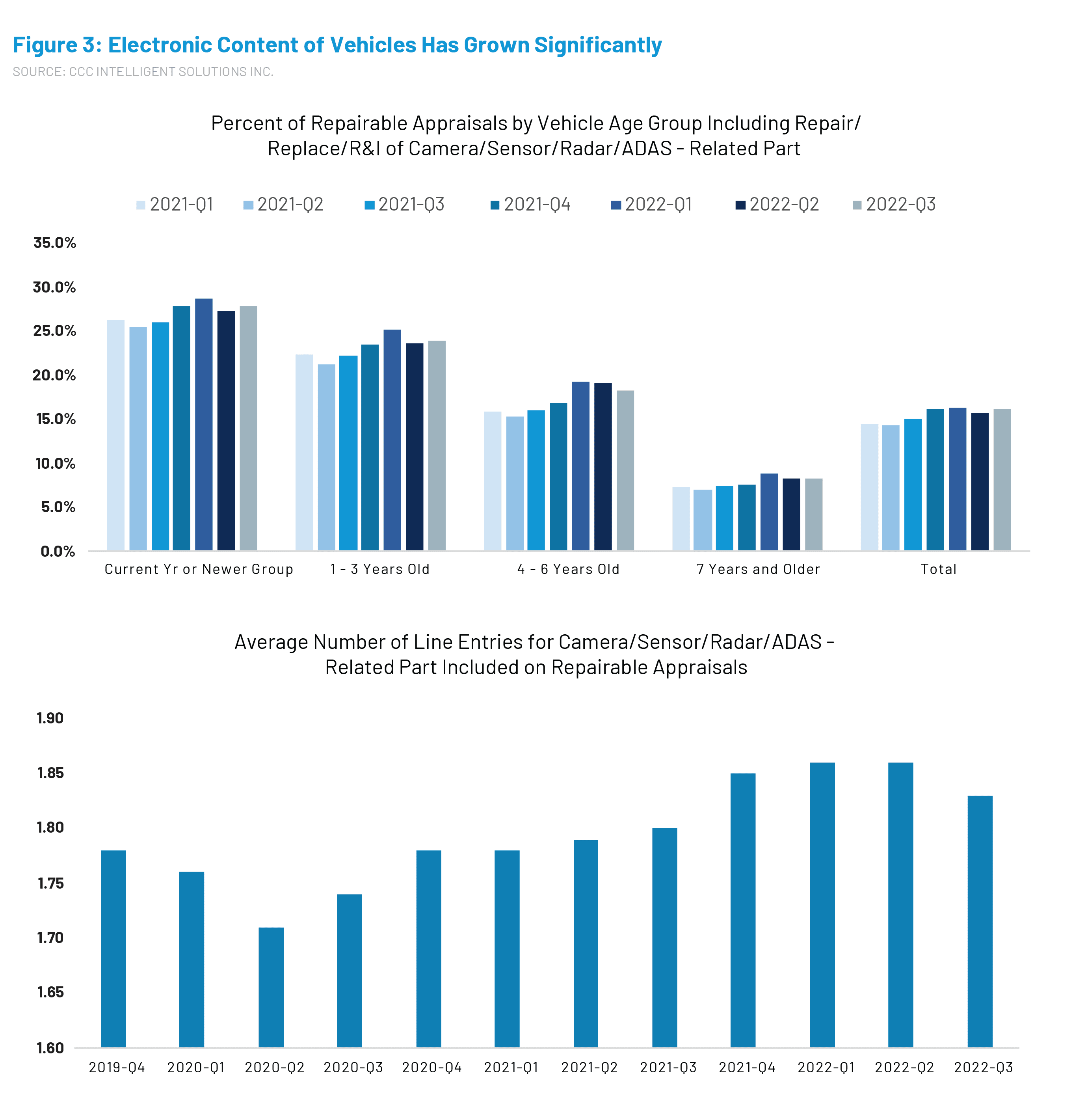 All these components must be tuned properly to work as designed, and even a minor fender bender can result in the need to reposition, reprogram and/or recalibrate these systems.   Removal and replacement of a camera, sensor, radar or lidar may require recalibration, depending on the OE and how its system is designed.

Pre-repair, in-process, and post-repair scans may be necessary to get a full readout of the electronics and whether they are operable. 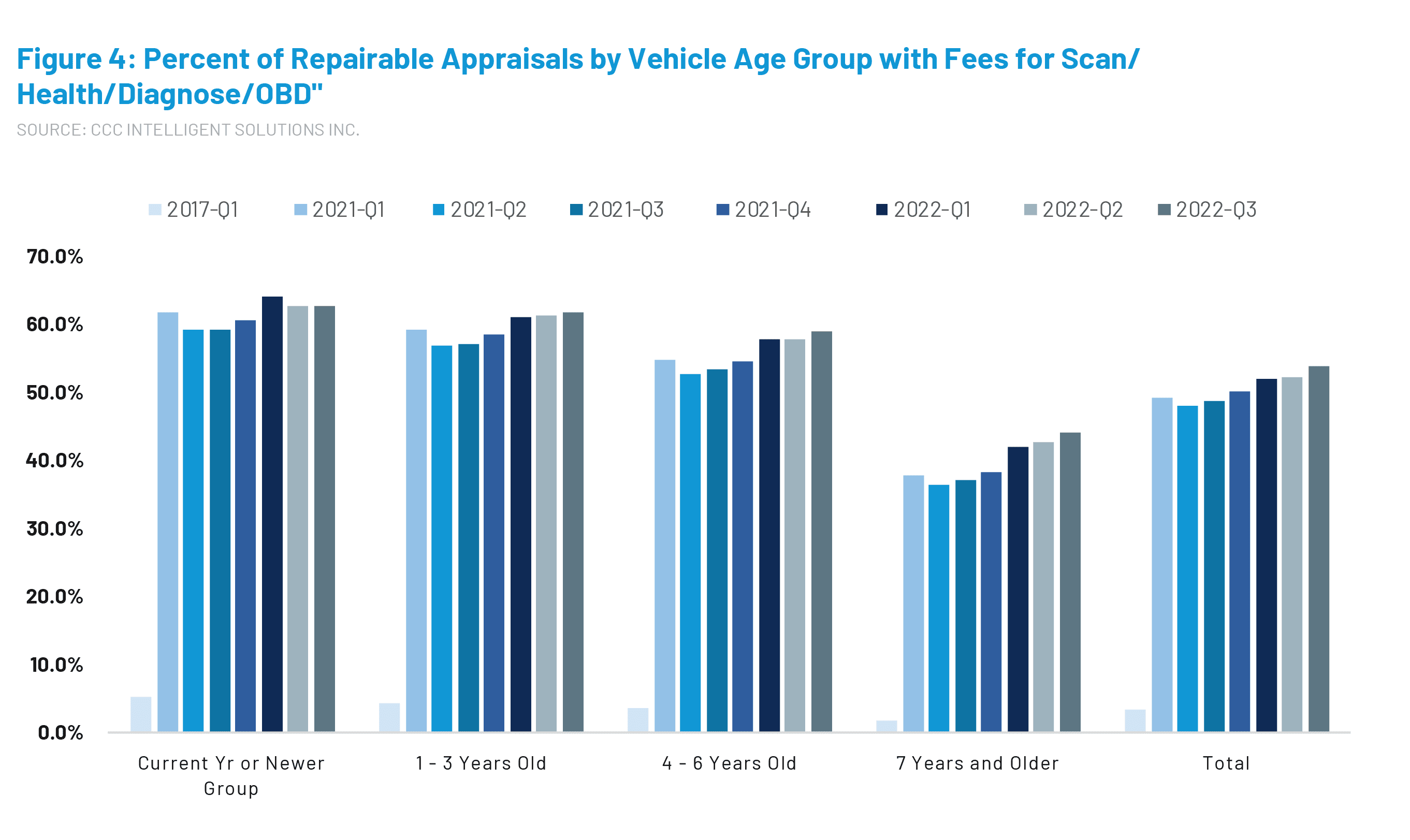 By Q3 2022 that percentage grew to over 53 percent.  (Note also that the absence of a scan entry in the appraisal does not necessarily mean that the scan was not performed but that it was just not recorded in the appraisal itself.)  Scan entries appeared on nearly 57 percent of Q3 2022 repairable appraisals with primary front impacts, and 57 percent and 56 percent of primary rear and side impacts respectively (Figure 5).  Nearly 70 percent of the appraisals with at least one scan entry included two entries, implying the presence of both a pre-repair and post-repair scan (Figure 6), and nearly 80 percent of the estimate of record include scan entries (i.e. approximately 20 percent of scan entries are added during supplement changes) (Figure 7). 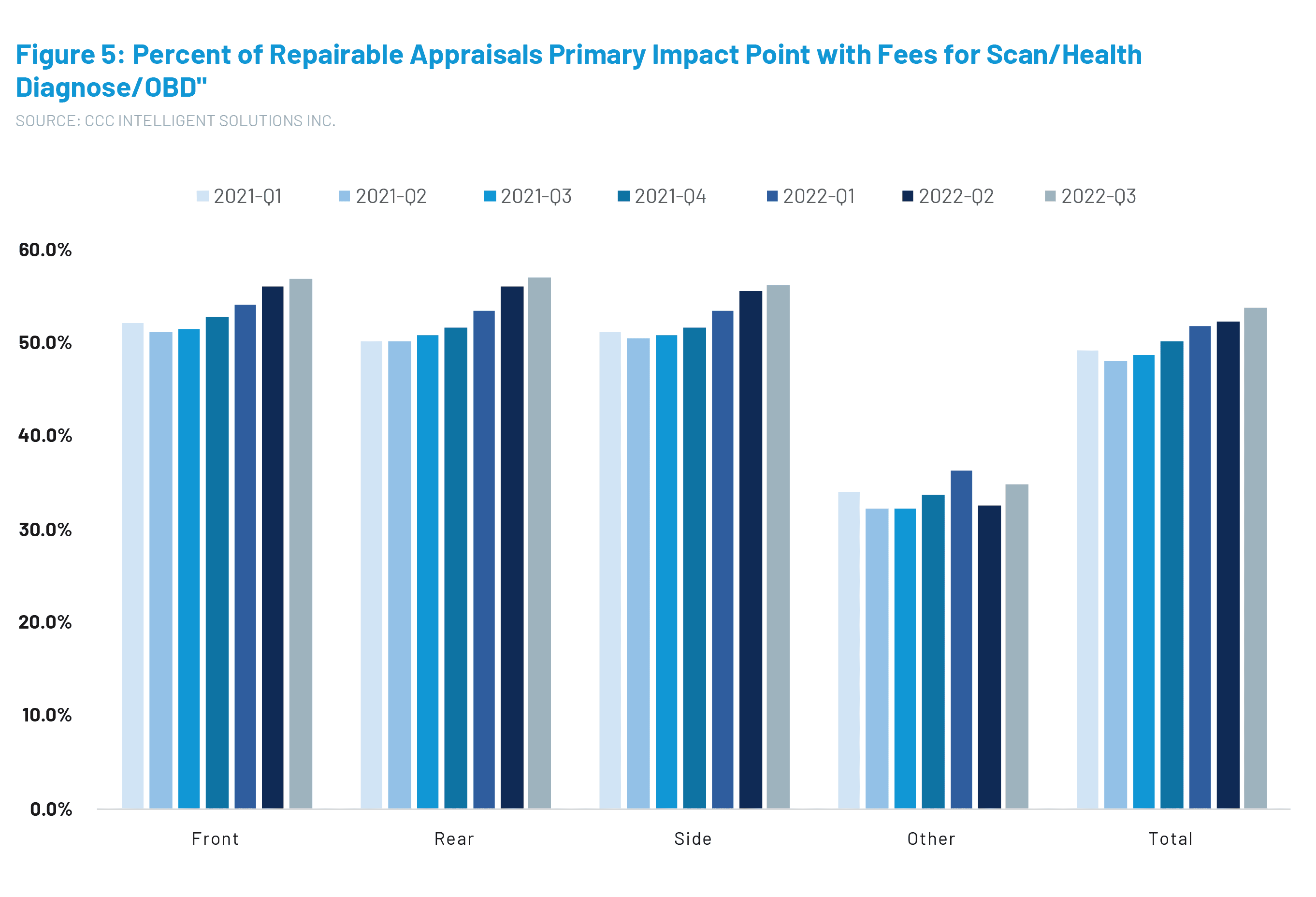 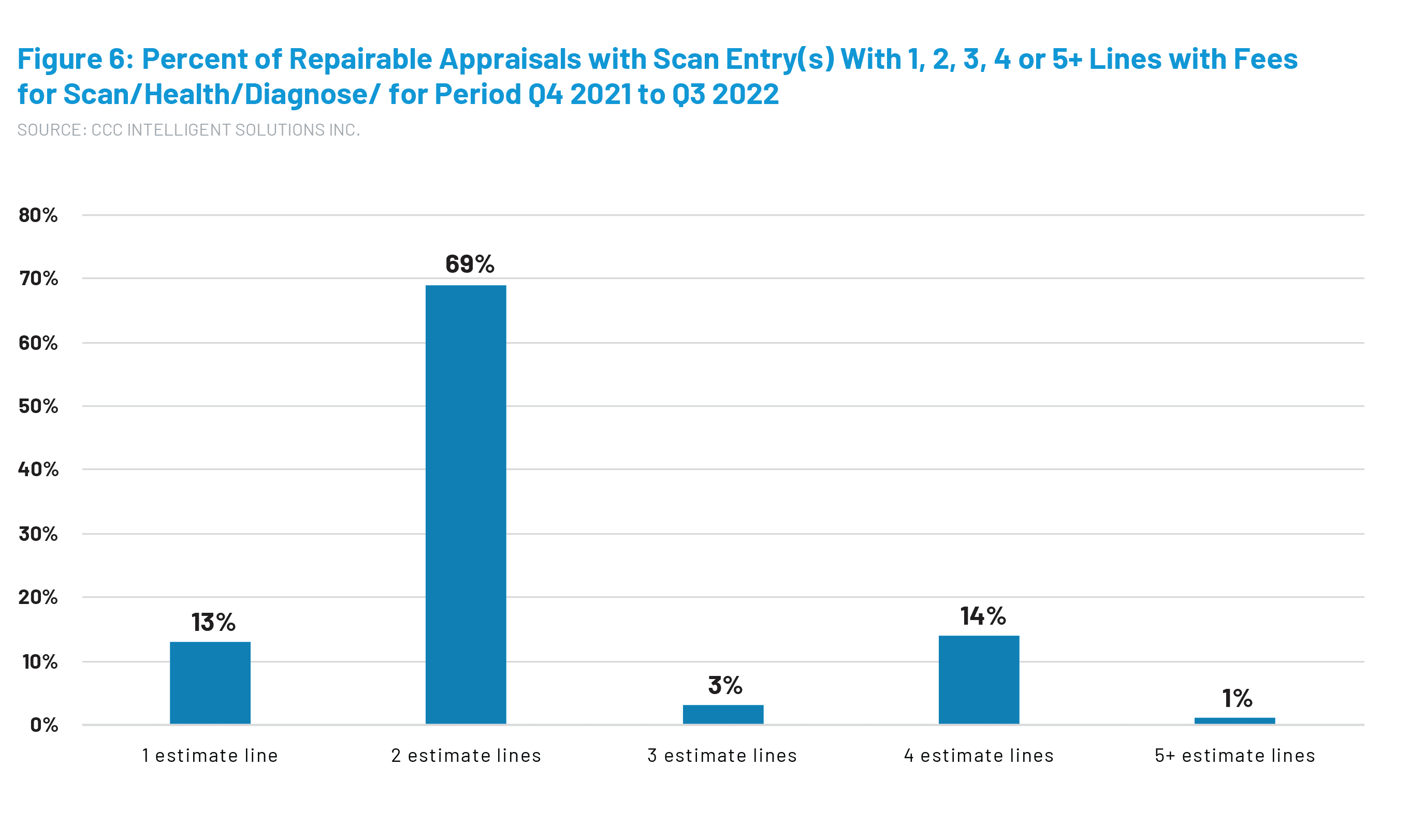 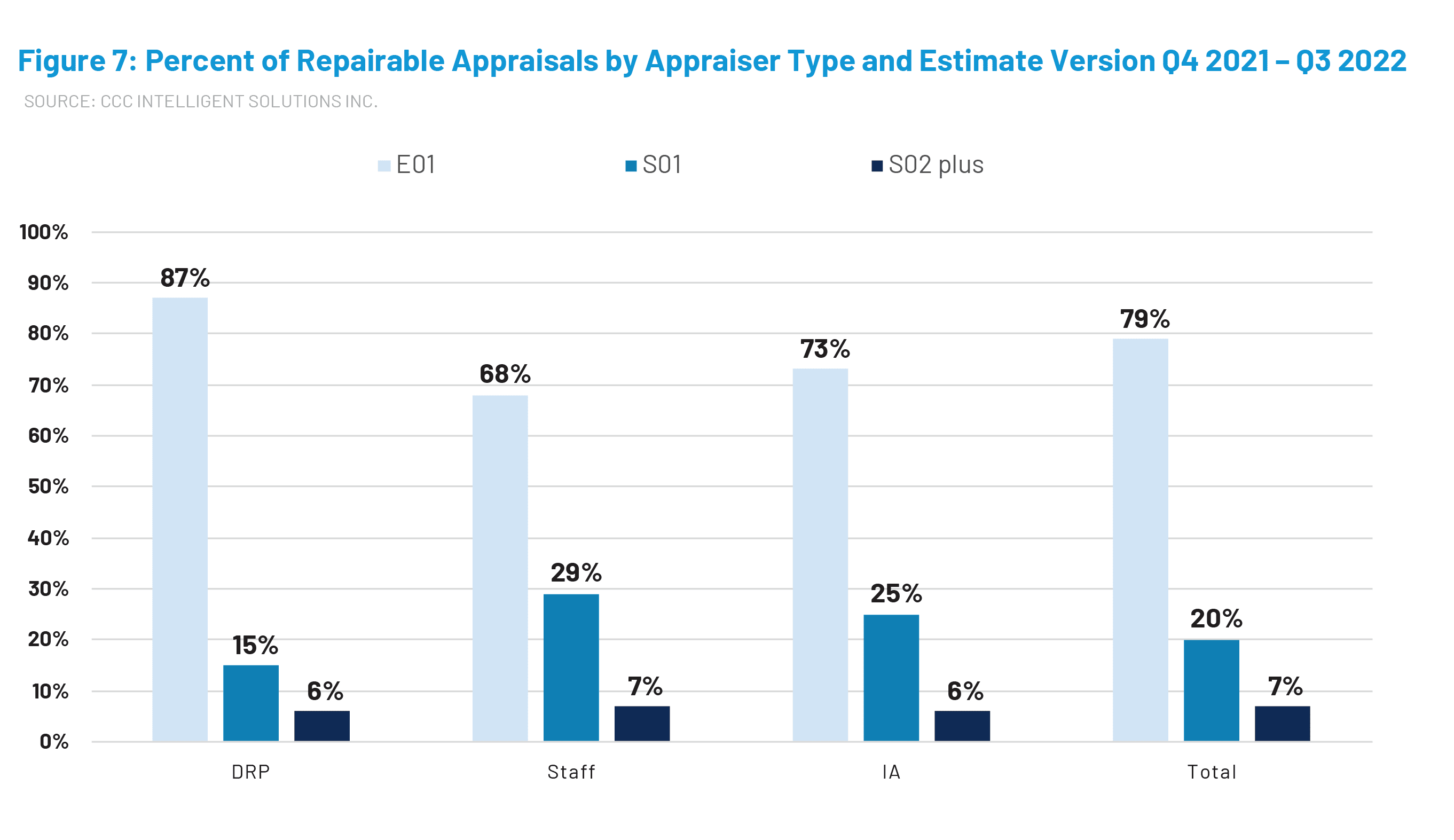 Documenting that vehicle-specific procedures and requirements have been completed properly is critical to help demonstrate accurate calibration has occurred. 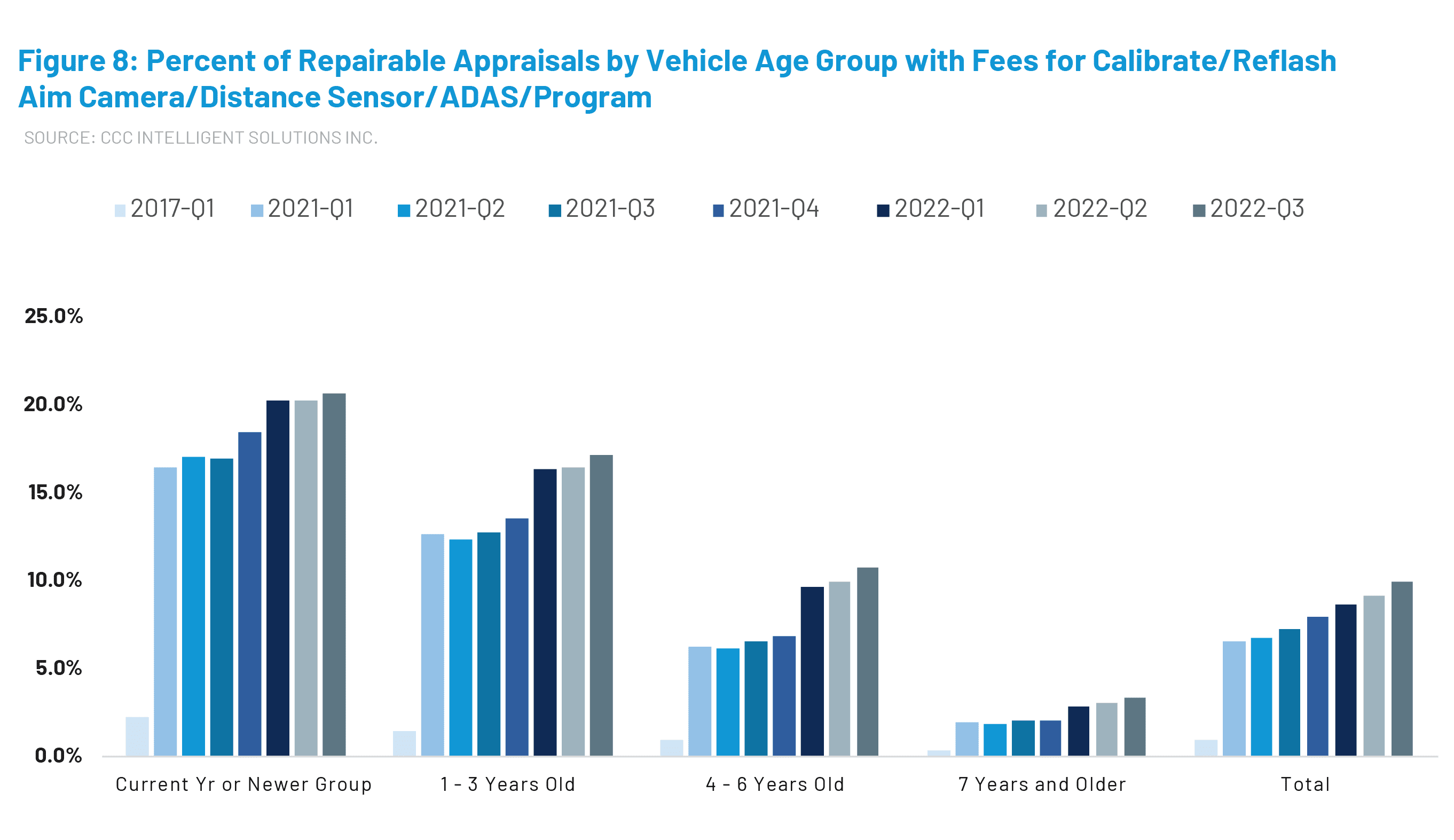 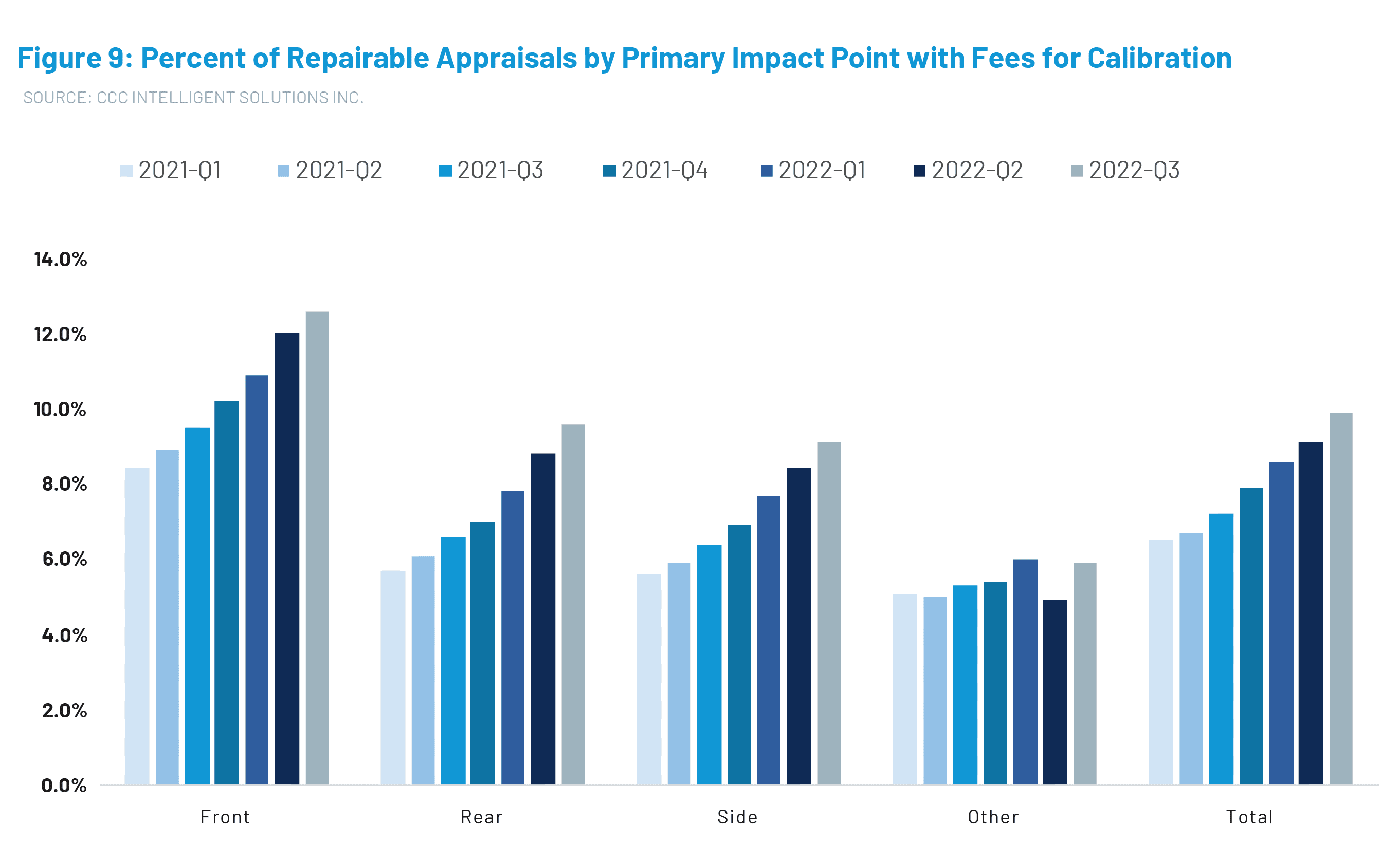 Many more calibration entries are added during supplement changes than for scans (Figure 10); and the fees associated with different types of calibrations see much greater variability than those for scans, in part due to the type of calibration performed, but also based on whether the calibration is done in the repair shop or outsourced to a dealer. 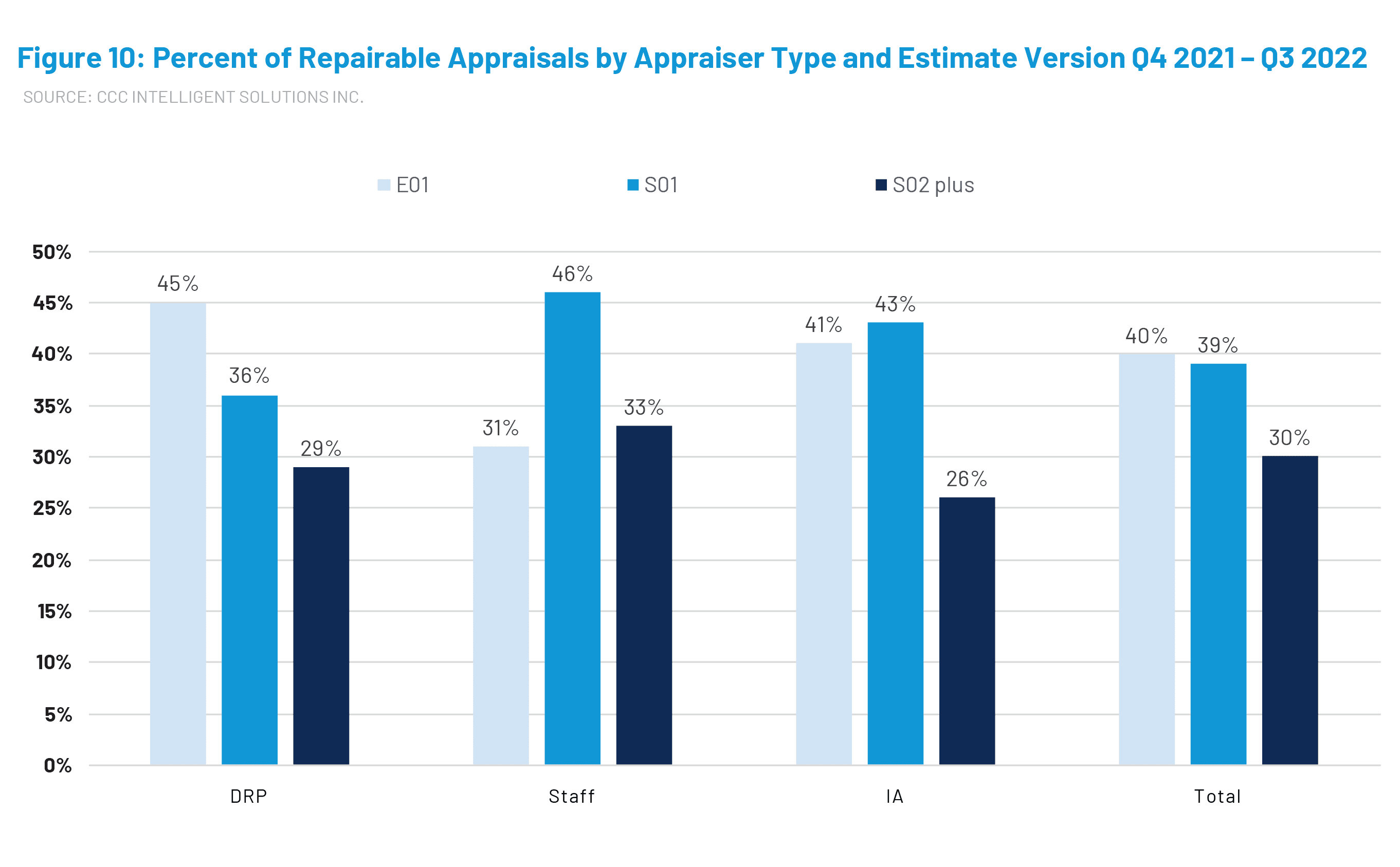 Figure 11 shows the average line entry amount for subcategories of calibrations based on key words – i.e. “Calibration-ADAS” subcategory includes over 155K distinct line entry text strings that range from a $5,394 fee for “ADAS sublet repair bill” to $11 fee for “disable battery for ADAS disconnect.” Given the range of what’s included (i.e. the calibration operation, an ADAS part, multiple operations, etc.) and the types of calibrations required depending on the OEM and the system being calibrated, understanding whether the fees are appropriate are an ongoing challenge. 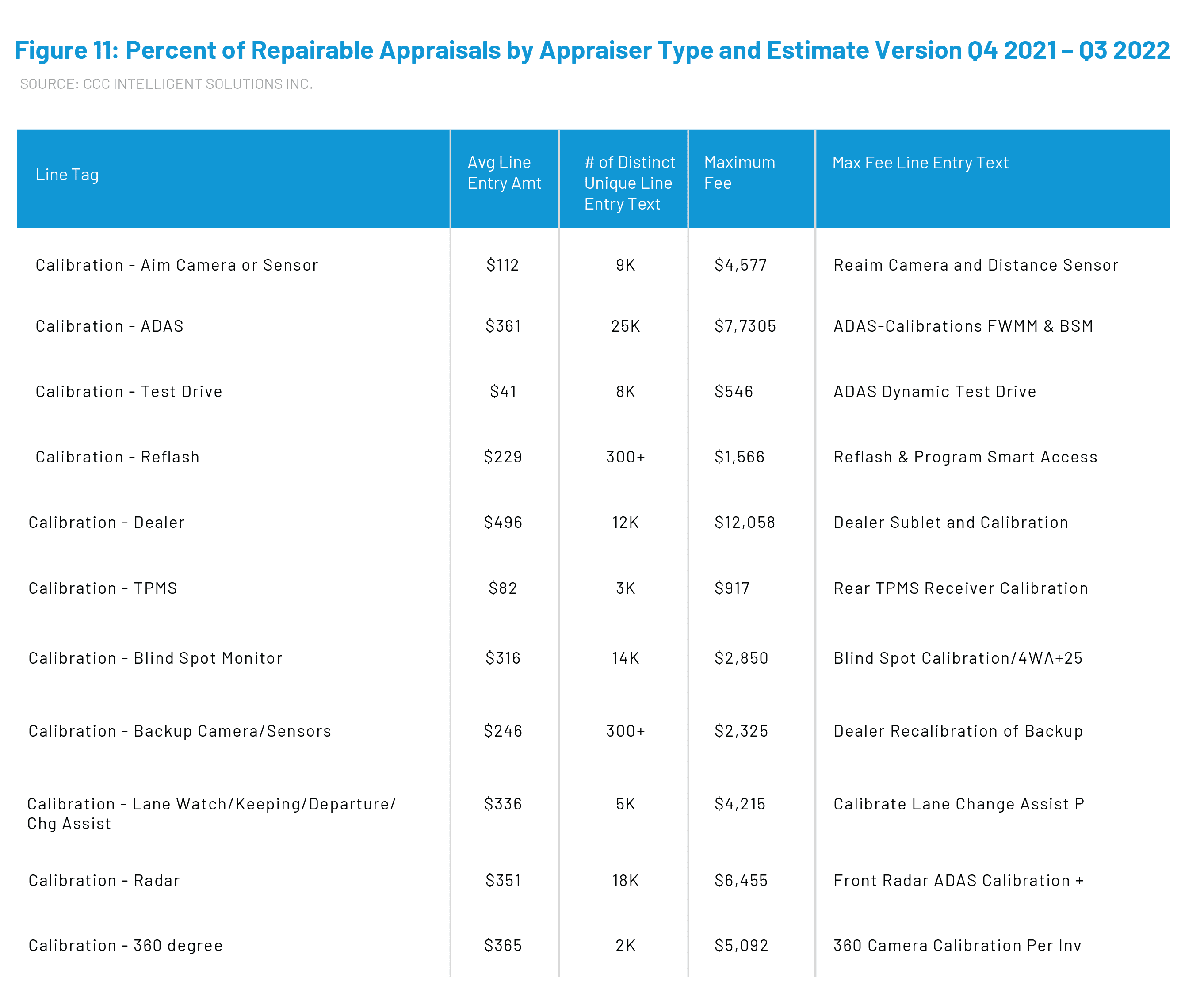 For automobile manufacturers, these features and other incremental technology implementation may help drive near-term revenue growth, gradually increasing the levels of vehicle autonomy and safety in our vehicle fleet.

By 2026, analysts expect Level 2 ADAS sales to reach $70 billion annually.[4] While Level 2 vehicles will remain a sizable market, Level 3 vehicles could be even bigger as soon as 2027, with sales of Level 2 and 3 vehicles approaching a combined $150 billion (Figure 12).[5] The uptake of ADAS will also create a large market for suppliers supporting this expanding universe. 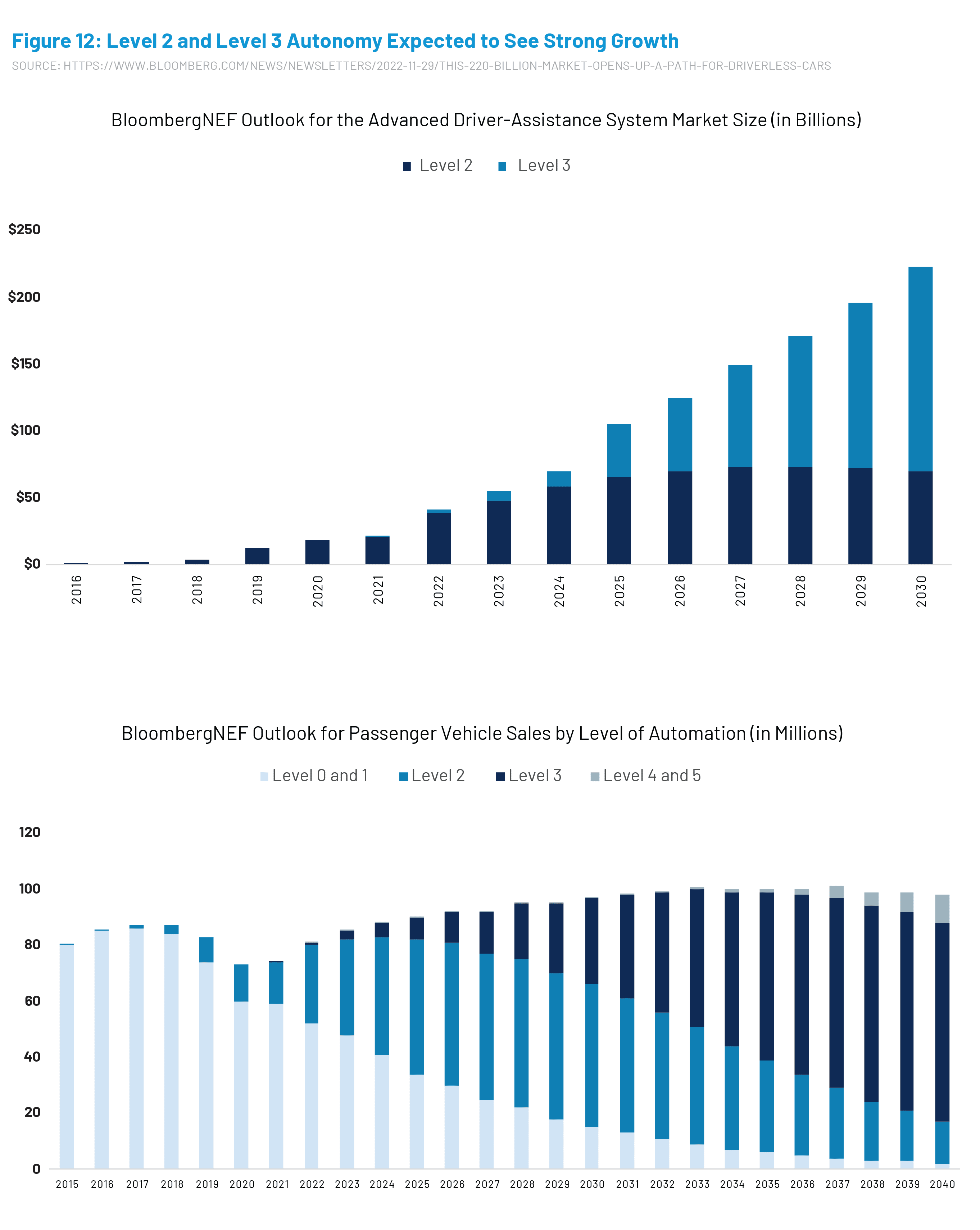 With the prevalence of ADAS technology in vehicles, including AEB and FCW, manufacturers will continue to be teased with the potential these building blocks of autonomy provide, while the ever-present demands for profitability could limit the investments required to scale deeper levels of autonomy (beyond Level 2 and 3) into the market.

As automobiles with progressively more advanced ADAS features represent an incrementally greater share of the vehicle pool, consumers will have fewer buying options that lack modern safety features.  Auto Manufacturers and, by extension, dealers should be inclined to initiate the change management necessary to inform consumers of vehicle safety features, capabilities, and new interactions with, or expectations of, drivers.  As alluded to earlier, repair facilities must be prepared with the appropriate training and tooling to service and repair ADAS-enabled vehicles.  And, as frequency, severity, and behavioral data becomes available, price competitiveness seems imperative in an already fierce insurance market.

NHTSA and IIHS have produced confirmation test guidelines or protocols that these same 20 automakers have indicated they will use to validate the basic functions of the automatic emergency braking (AEB) and forward collision warning (FCW) features. These include NHTSA’s “Forward Collision Warning System Confirmation Test”, February 2013, and IIHS’ “Autonomous Emergency Braking Test Protocol (Version 1),” October 2013.

The general requirements outlined by NHTSA to confirm the existence of FCW on a vehicle of gross vehicle weight rating of under 10K pounds states: “This test evaluates the ability of a forward collision warning system to detect and alert drivers of potential hazards in the path of the vehicle. Three driving scenarios are utilized to assess this technology. In the first test, a subject vehicle (SV) approaches a stopped principle other vehicle (POV) in the same lane of travel. The second test begins with the SV initially following the POV at the same constant speed. After a short while, the POV stops suddenly. The third test consists of the SV, traveling at a constant speed, approaching a slower moving POV, which is also being driven at a constant speed.”[6]  Specifically, in NHTSA’s “Docket Submission of Commitments to Advancing Automatic Emergency Braking Technology (Docket NHTSA 2015-0101),” the twenty automakers would meet the alert criteria for Test 2 and Test 3, but not Test 1.[7]

The information and opinions in this publication are for general information only, are subject to change and are not intended to provide specific recommendations for any individual or entity. Although information contained herein has been obtained from sources believed to be reliable, CCC does not guarantee its accuracy and it may be incomplete or condensed. CCC is not liable for any typographical errors, incorrect data and/or any actions taken in reliance on the information and opinions contained in this publication. Note: Where CCC Information Services Inc. is cited as source, the data provided is an aggregation of industry data related to electronic appraisals communicated via CCC’s electronic network or from total loss valuations processed by CCC.

The Next Horizon: Calibrations